I’ve been looking for cases in which there is something more than just witness testimony. Such is a case from May 27 of this year from White Hall, Illinois. The witness said that he had awakened in the night and looked out the window. He said that he saw a bright orange object with six or seven lights to the northeast. The object then shot up into the sky. There was no sound and that the UFO originally looked to be cigar shaped, but later seemed to be more saucer shaped.

But that wasn’t the end of the event. The next morning, he drove out into the field where the UFO have been. He found a circle of flattened wheat. He said that the object had flattened all the wheat the same direction without breaking a stem. 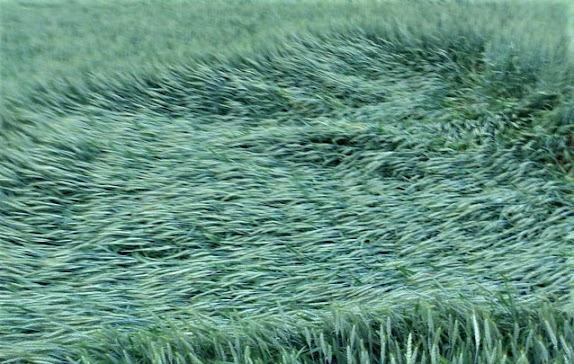 There are pictures of the landing site as well as the illustrations made by the witnesses. You can see the photos here:

On November 14, in Redmond, Washington, a woman saw a strange almost disk-shaped object. She didn’t hear a sound and was with her husband who also saw the UFO.

While this might seem to be just another UFO sighting, she did take a video of the object. The photos can be seen here:

Over the Susquehanna River near Selinsgrove, Pennsylvania, on April 28, last year, the witness was taking a walk early in the morning. The witness stopped near the boat launch and looked up, seeing a blue light over the water, coming from the Shamokin Dam power plant. The witness took out a cell phone that was set in the camera mode and set to “live.” The image on the phone is moving, but the witness was unable to transfer that to the website. Instead, there is a simple picture of the bright blue, spherical light. You’ll find the information here:

Staying in Pennsylvania, a woman near Palmerton, said she was leaving for work early in the morning of August 20, 2021, when she took a picture of a rainbow with her iPhone. She thought it was “extremely vibrant and wanted a picture of it. She said that there was a black streak in the picture, under the rainbow. She said that when she enlarged the picture, she couldn’t see any structure or form but did not believe this showed an airplane, or according to her, “… or any type of man-made craft.”

After a brief analysis, William Puckett said that he agreed with her. He didn’t think the streak was made by an aircraft and does believe it to be a real object. It was not an artifact created by the camera. You can see this here:

Finally, in Canada on August 18 of this year, a woman, who was the first to see the object and pointed it out to the others. It looked, to her, like a fireball going from west to east. After 10 to 15 seconds, they said the object was circular, was bright orange, and made a circular motion a couple of times. It finally disappeared behind some clouds. But, in keeping with the theme here, they did take a video of the object after the first 15 seconds of viewing. Unfortunately, I don’t have a link to this video. And, I’ll note one other thing, it seems that orange is becoming the dominate color in many of the sightings.