Coast-to-Coast AM: The Mystery Rocket and Some UFOs

Here’s what I learned about the rocket impact on the Moon. This apparently happened on March 4 of this year but NASA didn’t release the images until June 24. The impact left double, overlapping craters suggesting a mass at each end of the rocket, meaning, the engines at one end and a payload of some sort at the other.

Using my training as an Intelligence Officer, including a system in which all possible scenarios are explored even the most ridiculous, I wondered about two things. Who would be launching the rockets in secrecy and what was the possible payload? The answers, at the far end of the scale, was that some nation with atomic weapons and a space program might have attempted to place some of those weapons in orbit. That would account for no one coming forward to claim the rocket and what the heavy payload might have been.

But, I have since learned that the leading theory, at the moment, is that it was the third stage of a Chinese rocket that had been launched in 2014 which accounted for the lack of ownership. The third-stage rocket was originally listed by the 18th Space Control Squadron that it had burned up after it was used but they later changed the status to in orbit.

For those interested, the 18th Space Control Squadron is part of the United States Space Force Domain Awareness unit located at Vandenberg AFB, California, and is currently commanded by Lieutenant Colonel Matthew Lintker. The mission of the 18th SDS is to provide and advance a continuous, comprehensive, and combat-relevant understanding of the space situation and to keep track of some 45,000 pieces of space junk, which is a lot of space junk and might explain why no one is sure about the identity of the rocket that hit the moon.

Moving on, I wasn’t going to mention these types of UFO sightings any more, but I found a number of additional photographs from around the country for the June 19 UFO sightings. Looking at the photos, it is clear that they are additional SpaceX launches. I am surprised at the number of reports and the wide distribution of the witnesses. This picture is from Mesquite, Nevada, as just one more example. 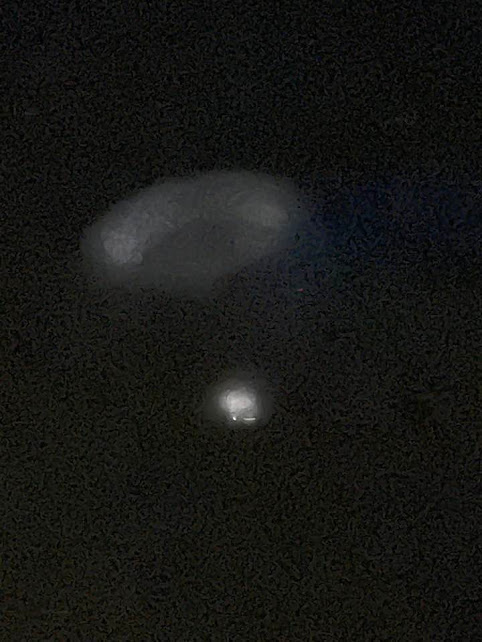 There are pictures of things other than the SpaceX launches. On June 4 of this year, the witness spotted what he thought, at first, was a falling star. It swooped down at high speed until it was about fifty feet over his house in the Killeen, Texas, area.

He described the UFO as tube-like and later as a tic tac with a rainbow of colors swirling around its center. As he got his phone out to photograph it, the UFO shot up into the sky. He said that it seemed to split into two, then balled up, turning into a rectangle with multiple lights.

He said that his wife got out her phone and began recording as well, until the UFO disappeared. He said that they could see another object appear and disappear. Once the first object had disappeared, the second came down and flew off in the same direction as the first.

They then jumped into their car and gave chase. It was too low and they lost sight of it. Following is the photograph:

Also on June 4, the witness was walking the dog on the north edge of Davis, California. The witness spotted something that at first appeared to be a balloon. It was a metallic object, only six to eight feet in diameter that looked like a clam shell with spikes coming out of the rim. The UFO was only two to three hundred feet over head. The witness said that it flew straight and level.

The witness also said, “I held up the phone to the object, observing both it and my screen at the same time, but the object would not show up on my screen… I watched it cruise out of sight… at maybe thirty to fifty miles an hour.”

The witness walked back to the car and checked the footage but the image wasn’t there. At home, the witness used photoshop, trying out filters that can find the edge of things, but they found nothing.

"This apparently happened on March 4 of this year but NASA didn’t release the images until June 24. "

Cut NASA a little slack. LRO is not taking images of the entire moon at very high resolution every day. Maybe at best once a year. You need the highest resolution images to see this size of impact. So, they had to figure out where the spacecraft needed to look and send that to the LRO spacecraft and it had to take the picture (had to wait until it was over the target too) and send it back (along with all the other real data being gathered besides this one pic) and it had to be processed and validated and calibrated. Then a certain amount of unknown bureaucracy.

That SpaceX launches generate UFO reports is not surprising, and given SpaceX's launch cadence we can expect to hear more reports of this nature

The same thing happened with satellite launches from the then-secret Plesetsk launch site in the then-USSR back in 1977, when citizens in (can't recall the name of the city) spotted a jellyfish-like UFO. In that case the Soviets emphasized the UFO aspect of the siting...which drew the attention of Western UFO researchers, which drew the attention of James Oberg and others, who then correctly determined that there was a secret satellite launch site at Plesetsk. Ooopski!

I was merely describing the situation and making no comment about the length of time between the impact and the release of the photograph. Given the situation, that was a relevant part of the story. How about cutting me a little slack?