Coast to Coast AM: UAP, UFO History and Current Sightings

As those of you who visit here know, I’m not a fan of the term UAP. I think it is an attempt to disassociate the idea of alien visitation from the observations made by military personnel. I think we all need to reject it simply because it denies the history. But. I have a document dated 1949, while the Air Force was struggling with the term flying saucers. It uses the phrase Unidentified Aerial Phenomena to describe, well, a flying saucer. I found it interesting that we have actually returned to one of the original descriptors of the flying saucers yet are using it to reject the history of them.

And speaking of history, on one of the UFO lists that provides me with interesting information there was a query from one of the list members. Vicente-Juan Ballester Olmos wrote to ask for help about a UFO seen during the Belgium UFO wave. According to the information, on June 26, 1989, the witness and his wife saw a strange, globe-shaped object with four landing gear. The witness was a mechanical engineer and was reported to be quite credible. His wife saw the UFO as well, and Olmos asked if anyone knew of other sightings with a similar object.

Moving to a more current report, the witness and his wife were sitting outside at their home in Jeffrey’s Bay, South Africa, at about 6:30 on May 18 of this year when an odd-looking object glided over them from west to east. The object consisted of about 20 square lights on each side in two straight parallel lines. They estimated it to be one kilometer in length. He said he could not tell whether it was in space or in our atmosphere. They both got their cameras, but could not film the UFO. He said he had never seen something so large in space. It took about 3 minutes to cross the sky. He said they spend quite a bit time in the evening sitting outside and always look for satellites and shooting stars, suggesting some knowledge about what is in the sky around them.

I mention this sighting only because it reminded me of the sighting by Clyde Tombaugh, a reputable astronomer who discovered Pluto. On August 20, 1949, Tombaugh and his wife were in the backyard. He wrote, “I happened to be looking up… admiring the beautiful transparent sky of stars, when suddenly I spied a geometrical group of faint bluish-green rectangles of light similar to the Lubbock Lights… As the group moved south-southeasterly, the individual rectangles became foreshortened, their space in formation smaller and their intensity duller, fading from view about 35 degrees above the horizon.”

Tombaugh said that he thought they were individual lights but his wife suggested they were on a larger object. Donald Menzel, the Harvard UFO debunker, said it was probably lights from the windows of other houses reflecting on the nonexistent haze, but Tombaugh disagreed because the night was clear without a hint of haze. Since Menzel wasn’t there and Tombaugh was, I accept Tombaugh’s denial of the alleged identification.

Finally, on April 21 of this year a man in Evansdale, Iowa, photographed a cigar-shaped craft that was in sight for about a minute. He said that his daughter first saw the UFO and asked him what it was. He thought she meant something on the ground, and then looked up to see the UFO. He took two photos of it, along with a short video as you can see. 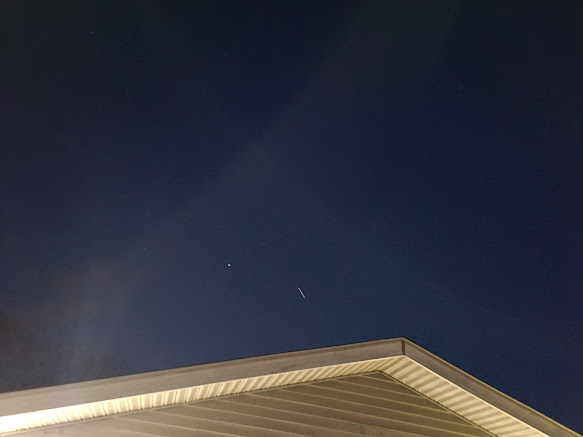 As usual, with many of these current sightings, I have not had the opportunity to completely vet the photographs. There is not evidence of a hoax here but that doesn’t mean we’re looking at an alien spacecraft. That is something that we all need to remember when looking at these sightings.
Posted by KRandle at 3:11 PM

"Those who forget the past are condemned to repeat it." [Burke/Santayana/Churchill]. And in the referenced case, the UFO sighting of prominent astronomer Clyde Tombaugh would otherwise be consigned to the dustbin of history ... just as Menzel would prefer.

AS to the Jeffrey's Bay, South Africa sighting, there was a Starlink satellite group visible that night. The time is off just a bit, starting at 6:18 & ending at 6:36, but they were moving NNW to SSE. Here's a link to the Starlink satellite passes for that location, but you'll have to go back to the date in question through the "Search period":

The Evansdale, Iowa photo is certainly a Starlink satellite group. Here's a link to a photo taken at nearly the same time in Michigan:

There is a large cluster of similar reports on that date at the same time (including the Evansdale, IA sighting) at the NUFORC site. Scroll down to April 21: