How Many Planets - Part Two

About a year ago I wrote a column asking how many planets there were in the Solar System. The only real conclusion I drew was that the true number wasn’t nine. If Pluto was demoted, the answer was eight, and if not, the answer was twelve. Either way, changes were coming to our definitions.
Now the International Astronomical Union has suggested the correct answer is... twelve. I was right. But I picked the wrong objects.
According to the IAU, 1 Ceres, once thought to be a planet, demoted to asteroid, would once again reach planeta 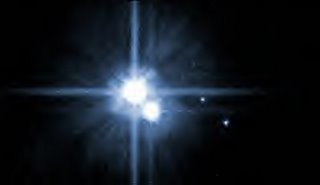 ry status. Charon (which for some reason I called Clarion) would be named a planet, orbiting a central point with Pluto and both orbiting the Sun (See photo of Pluto, Charon and their two moons, photo courtesy of NASA). Kind of a strange relation between the two.
And 2003 UB313 (aka Xena) would also be called a planet. These three objects along with 1 Ceres would be known as Plutons, a sort of small planet. All would be out with Pluto or beyond with the obvious exception of 1 Ceres.
But if this is voted on by the membership of the IAU, then it opens the door for a number of other objects far out into space, one of them about half the way to Alpha Centuri.
Discover magazine, in November 2004, carried a story about these new objects, suggesting that Sedna (aka 2003 VB12) should be considered as a planet. According to the figures published them, it is larger than 1 Ceres, and could be twice as large.
According to the magazine, in addition of Sedna, there were an additional seven objects that ranged in size from about five hundred miles in diameter up to about a thousand miles (2004 DW).
The IAU’s seven member Planet Definition Committee recommended that 1 Ceres, Charon and Xena all be awarded planetary status. They created two criteria for this. The object had to be large enough so that its gravity would pull it into a nearly spherical shape and it must orbit the Sun. That second criterion eliminates the largest of the moons in the Solar System. Many of those objects out beyond Pluto, in the Kuiper Belt, just barely make it, but the latest information makes them large enough.
So, at the moment, there are nine planets in the Solar System, but after the membership of the IAU votes, the answer will probably change with three additions, which makes twelve. In the years to come, if the information we have holds up, the answer will rise to, at a minimum of nineteen with some astronomers believing that thirty is a more likely answer.
As I said before, this is an exciting time to study astronomy. Maybe 19 planets in our Solar System, more than 200 planets discovered around other stars, and much more to be found.
Posted by KRandle at 11:21 AM

Sorry for the multiple postings. This Blogger program was obviously written by a nitwit.

The real problem with the planet definition is that if Earth suddenly found itself orbiting Jupiter, it would no longer be a "planet."