hoped to have nothing more to say about Kal Korff but I have been swamped with emails from him over the last several days. I hadn’t thought I had said anything too controversial, just commenting on his commission in an organization that no one had heard of and a suggestion that his claim of a truly astonishingly high IQ might be more hyperbole than established fact. I’m not sure about the validity of a self administered IQ test... nor am I certain of the validity of any IQ test, but that’s something else.
In my original post, which contrary to what Korff claims, is not on Paul Kimball’s blog, I didn’t mention the self-evident contradiction in Korff’s claims. He said he was a member of this supersecret anti-terrorist organization called Special Secret Services S3 (as proof of his claims, Korff at left in uniform). If it is so secret, why is Korff promoting it on radio, television and the Internet. Wouldn’t you think that a secret organization would want to remain secret? Wouldn’t my suggestion that nobody every heard of them make them happy?
But, according to Korff, they were annoyed at me. I would have thought they would want to thank me for helping them to hide. Now, rather than a passing mention in my notes on Korff, I actually identify the organization which has made Korff a captain (and why only a captain? Why not a major or colonel or general?).
But here is another point. Korff has let me know that he, and his buddies in the media, and possibly an attorney or two, are going to subject me to a forensic audit of my work in the UFO field and then publish the results. I wonder why everything is now forensic... forensic psychology, forensic artists, forensic bath mat creators, but that is a question for another time. 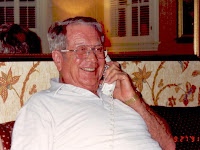 Korff, and his alleged pals, are annoyed that I haven’t apologized for Frank Kaufmann. Hey, I thought exposing the guy was enough. I mean, sure, I thought he was telling me the truth, he gave me documents to prove he was who he said he was, showed me pictures, and promised to prove the truth when the time came. So, yes, I thought he was credible. When I asked Walter Haut (seen at the left and Kaufmann seen below) about Kaufmann, Walter told me that anything Kaufmann said was golden. Hell, it was Walter Haut who told me about him.
So, the moment I learned the truth, that Kaufmann had created documents, that we had copies of both the originals and the fakes, I told Mark Rodeghier of the J. Allen Hynek Center for UFO Studies that we needed to publish the results. No waiting around for an opportune moment. No dancing arou

nd the question, but to publish the results as fast as possible, even if they shed a bad light on me.
What that means is that I helped expose the witness that I once believed. What is the problem there? I corrected the inaccuracies just as soon as I learned the truth. Is there anyone in the UFO community who hasn’t believed a witness who later turned out to be lying to them?
Have I made other mistakes? Sure. I believed Don Schmitt was my friend and a credible investigator. I didn’t know he was telling people that I had been planted on him and that he suspected me of being a government agent. When some of his lies began to crash down, I defended him. The last straw for me was to learn that he had been telling people not to talk to me. That from my partner in investigation and this doesn’t even begin to cover the damage he has done to the Roswell case and UFO investigation.
Stan Friedman will tell you that I’m wrong about MJ-12, though I don’t think so. He’ll tell you that I’m wrong about Gerald Anderson, though it’s clear that Anderson was making it up as he went along otherwise there would be no understanding of his contradictory statements. He’ll tell you there was a crash on the Plains of San Agustin but won’t tell you that the diary kept by Barney Barnett’s wife contradicts this and Anderson.
But I have drifted away here. Kal Korff seems to believe that I have maligned him. He thinks that I should now be investigated. Hell, I’ve been waiting for someone to do just that. I heard Stan Friedman once ask friends if I have ever served on active duty as an intelligence officer. I told them it was the wrong question. What Stan wanted to know was if I had ever served on extended active duty as an intelligence officer. The answer is yes.
If we wanted to look at just one aspect of Kal Korff’s genius, all we have to do is look at his claim to have a 500 book deal arranged. I know of no author, Stephen King, J.K. Rowling (who might hold the world’s record for making the most money off a book) has anything like that. Just how in the hell could you write 500 books. If you wrote one a week, that would take you around ten years and that doesn’t give you much time to eat (or cook American meals for your friends in foreign countries... see
www.UFOWatchdog.com), or sleep, or engage in secret activities with your super secret anti-terrorism pals. But, once again, I digress.
So, once again, I have managed to offend someone in the UFO community. I have done this before and will probably do it again. The only way to avoid it is to believe everyone and everything. Question nothing, no matter how dumb it sounds and while you’ll be treated fairly well inside ufology, those outside will probably think you’re an idiot.

If it is a super-secret organiztion, I would have thought that they would have liquidated Korff by now. It's a good thing he wasn't around to be entrusted with the D-Day plans, or we would all be speaking German right now (well, probably not, but you see what I mean).

But then this is a guy who claimed to be an "expert witness" in the OJ trial, despite the fact that he never took the stand, which is what you have to do in order to be considered a witness (never mind the fact that there is no such thing as an "expert" witness unless a judge declares him as one, and then only after a voir dire to determine his bona fides to testify)... which is, of course, how I got on KKK's bad side in the first place.

Have fun with the "forensic audit" Kevin. ;-)

This Korff, he seems of interest to squirrels. Let us ignore him and thwart his bid for attention. Lock your doors though.
THANK YOU for your service in Iraq!

Check the AVG Blog Sat or Sun for same!

Korff is obviously suffering from some psychological damage - just FYI, I spoke with Steven Mitchell, his editor at Prometheus, who told me that they have a ONE book deal with Korff, and that he's tired of fielding calls about Korff's wacky claims. The best thing to do at this point is ignore him, he's a sad figure.

so another kook has crawled out of the woodwork. Why would anyone be surprised?

UFO 'research' seems full of romantic fools, gullible but well meaning people, rank snake oil sellers and some who perhaps should be in some form of treatment.

Just finished reading your co-authored 1998 book on so-called abductions. Was nice to read a book on UFOs which sounded like logic was a factor in its production.

This Korff dorf is just another weak UFO debunker on the level of old Phillip "See Through" Glass, or was that Phillip "Low" Class? Tough to keep track of these bozos. Even poor William Cooper was squeezed by Uncle Sam (because he got into income tax trouble) into being a UFO debunker in his final years (and he also did a lousy job of it) before they killed him anyway. New World Order paranoia isn't nearly as much of a problem as very real New Alien Order might be, folks!