Well, the results are in... even if so many of you decided not to bother to vote in the Rhodes photographs poll. Only 38 people voted, which suggests that the interest in the pictures isn’t all that great. Most seem to have ignored the possible significance of them and I’m not sure why.

Clearly the majority of the votes, or about 64% thought the pictures represented something other than an alien spacecraft. Many thought it was a hoax and I know they believed that because Rhodes seemed to have been less than honest in his educational background. 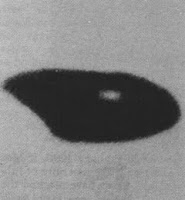 Only 34% though the pictures showed something of extraterrestrial origin. I’m not sure if they were persuaded by the story told by Rhodes, his genius, the seeming connection to the Arnold sighting of about two weeks earlier, or they would just believe about anything that leads to the extraterrestrial.

One thing I haven’t researched is if the Arnold drawings, now available to us because the Project Blue Book files have been released publically, might have influenced Rhodes, if the case is a hoax. His photographs match, to some extent, the drawing offered by Arnold to Army investigators... that is, his original drawings and not the much more stylized illustrations he produced later.

I’m not really sure on this one. That Rhodes apparently lied about his education is bothersome. That he seemed to have embellished his job with the Navy is worrisome. But I’m not sure that we can reject the photographs on that basis alone.

That they sort of match with Arnold is a plus for them, but is it enough to overlook his embellishments on his "resume"? I really don’t know.
The best solution here is to slip this one into the "unidentified" file because there is no proof the pictures are faked... but to keep our eyes open for any better solution. This simply is not the case on which I’d want to argue for the reality of alien visitation, and in the end, I think that is the most important point
Posted by KRandle at 11:02 AM

"His photographs match, to some extent, the drawing offered by Arnold to Army investigators"

That's the most interesting aspect of the photo, without question.

"One thing I haven’t researched is if the Arnold drawings, now available to us because the Project Blue Book files have been released publically, might have influenced Rhodes, if the case is a hoax."

I've read a lot of newspapers from the summer of 1947 and I do not recall seeing Arnold's drawing in them.

"That Rhodes apparently lied about his education is bothersome."

I understand McDonald's archives are available for those who can make the trip to view them.

From your 2006 article here: "I made a trip up there in December and spent an hour or so with him. Devoted most of my querying to the matter of the degree and his associations with inventory (sic), Lee DeForrest..."

Also a 'sic' after McDonald's spelling of De Forest.

Is there anything else in his archives about Rhodes and De Forest? Why do you think he was interested in their relationship? Do you think Rhodes lied when he said De Forest arranged for the honorary degree?

Who do you think is the most trustworthy and truthful, De Forest or Rhodes? Which of the two fits the description often applied to Rhodes?

"That he seemed to have embellished his job with the Navy is worrisome."

How do you know? Are you saying he had a job with the Navy, but embellished it? What was his job and how did he embellish it?

The one investigation you've reported on is your correspondence with Dr Meinel, and I have to point out to you, again, that Meinel **confirmed** Rhodes story that he worked at Kitt Peak for him.

Possibly, Meinel changed the subject when you raised the question of the degree, not because of regard for Rhodes, but for someone else.

Maybe McDonald and Meinel knew something about Rhodes they would not discuss.

I also see a bit of a resemblance to the Roswell ship as presented in the TV movie that was based on one of your books and see that your name is featured prominently on the box of the Testor kit model. What can you tell us about all that? I think it's a story in itself and worth an article.

""His photographs match, to some extent, the drawing offered by Arnold to Army investigators"

That's the most interesting aspect of the photo, without question."

*
“It was a disk almost identical to the one peculiar flying saucer that had been worrying me since my original observation—the one that looked different from the rest and that I had never mentioned to anyone.”


In Ted Bloecher's Report on the UFO Wave of 1947 there are two drawings of the Rhodes object. They are interesting because lens and, especially, shutter distortion have been removed in the rendering. I don't know who did the drawings, but they seem a good approximation.

It should be kept in mind that what Arnold saw were photos of an object whose appearance was distorted by the camera.