I got to thinking some more about the Fact or Faked: Paranormal Files video of a UFO crash at the White Sands Missile Range and found it strange that they had not spoken to anyone who worked there. I know that during different aspects of my research, whether into the treasure hidden in Victorio Peak (no, I don’t think there is one) to other aspects of the UFO phenomenon, the Public Affairs Office had always been courteous. So I sent them a note asking about this.
Monte Marlin, of that office, replied quickly to me. He said that he once had a email response prepared that he sent out to all that asked about the tape, which struck me as a smart thing to do. It also struck me that for him to do that, it meant that there were others who also asked the question about the footage which isn’t a bad thing. I mean there were enough people asking about the validity of the tape that he felt compelled to create a generic response to save himself some time. (The missile park at White Sands seen below.) 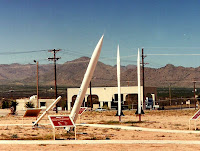 He suggested that this particular test was part of “an infrared shot of a Navy missile test...The high powered optics tests are part and parcel of our test mission here at the missile range. The data we collect belongs to our ‘customers,’ the weapons developers and is used for technical purposes. Once in awhile the clips make their way to the general public...”
Marlin also noted, “There are many, many launch areas and instrumentation sites on this enormous missile range. It is not uncommon to see poles in video footage. The poles may carry cabling related to the test or some poles have markings so that when we look at the footage, we can measure time/space distance.”
Which I found interesting because one of the experiments they ran on Paranormal Files was an attempt to duplicate the footage using an array of cables. It suggests that they had talked to the PAO, understood how some of the tests were conducted, but that wouldn’t have been very dramatic on TV. So, they just passed on that and ran their test.
This, I think answers one of the questions about the show... but hey, don’t get the wrong idea. I enjoy it. They have done some very useful experiments and solved some interesting mysteries. In this specific case, I think the answer was handed to them but they had thirty minutes to fill. Talking to a guy in an office isn’t nearly as exciting as running experiments in the desert, especially when you get to blow up a model rocket.
Posted by KRandle at 3:20 PM

Oh, how I wish they would have hired you for the show instead of the cheery spokesmodel! I got a clip of next week's episode. I'm still shaking my head. It's just deteriorating rapidly, especially when they try to ghost hunt by unscrewing a flashlight and talking to the ghosties, begging them to make an intermittent connection with the light. (rolling my eyes). I love your blog, BTW! It's great to hear a level head in the field of unexplained.