Coast-to-Coast AM: More MADAR and Other Sightings

I continue to beat the drum for multiple chains of evidence in UFO sightings. This means that there is more than just a single witness reporting what he or she had seen. The MADAR system is an attempt to create those multiple chains of evidence by adding a note of instrumentality to the sighting. I had suggested to Fran Ridge that they set up a way for photographs be taken from multiple locations during an alert but he had already thought about that and was attempting to set it up. To this point they haven’t had any success, but, as they say, it only takes one.

One of the latest sightings came from McKees Rocks, Pennsylvania, on June 19, 2022, when the witness, who had been laying on a lounge chair watching airplanes saw a silver object come from the north and fly overhead. The UFO was moving at a speed like that of an airplane approaching an airport, or around one hundred miles an hour depending on the type of aircraft.

The witness said the UFO was smaller than a passenger plane, was a silver-colored oval and made no noise. The witness didn’t know if it might be some sort of balloon but said that it was moving at a steady pace and didn’t seem to be floating. The UFO eventually disappeared behind the trees in the distance.

There is a MADAR Node about 28 miles from the sighting location and there was a compass deviation reported at about the time of the sighting providing a second chain of evidence.

Fran Ridge reported that his thoughts were of a balloon but the direction was problematic. The MUFON Field Investigation concluded this was unknown UAV. This is just another case where the MADAR UFO Officer, Jeremy Haslam, selected an incident that looked like a potential sighting of interest and the data from a nearby node suggests an anomaly at the time. Since the MADAR was not in alert mode, the data are 60-sec lines rather than 01-sec lines.

I am always a little hesitant to report on possible abduction cases but there was an interesting sighting reported on July 2 of this year in Midvale, Utah. The witness said that he saw a large, disk-shaped object that had circular-shaped white lights flying silently over the apartment parking lot and courtyard areas where he lived. The lights on the disk were rotating and the UFO was hovering low. It traveled to the south and disappeared over the trees at the end of the property. The witness said that the moment he saw the disk, he felt frozen and there was a time when he couldn’t do anything other than stare at the UFO. Seconds after the sighting, the witness felt faint, as if he was about to pass out. There were many similar in France in 1954, which are reported in the book, Levelland.

As but a single example, on October 16, 1954, Dr. Henri Robert, while driving through Baillotet, France, saw four objects in an echelon formation flying over. Once of them dropped out, descending in what was described as a falling leaf pattern, landing about 300 feet away. Robert felt an electric shock as the car’s engine died and the headlights dimmed. He was unable to move as he watched a figure moving in the light of the craft and then, according to Robert, all went dark. Later the headlights came on and the craft took off to the north.

The sighting lasted about ten minutes, but the witness seemed to have experienced a period of missing time. This is, of course, one of the symptoms of an abduction experience.

I confess that I sometimes select sightings with interesting pictures with foreground detail. Such is one from Burr Ridge, Illinois, from July 31 of this year. The witness was taking pictures of the backyard and didn’t see anything unusual. When looking at the pictures, the witness saw a strange red, black and white craft that had a strange green light below it. 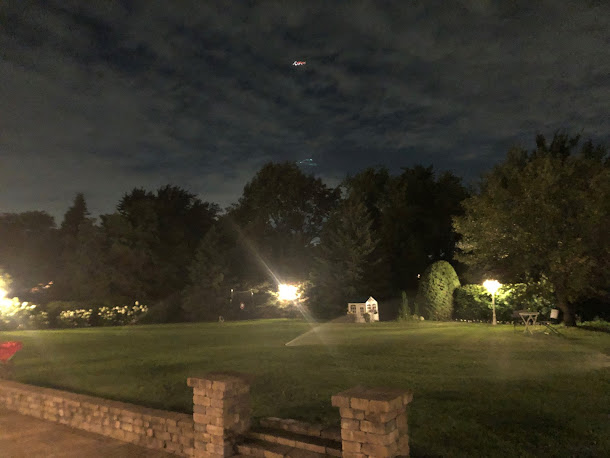 As I say, I liked the detail of the environment of the but the UFO isn’t very clear and looks like random lights in the sky that do not match those of aircraft. I don’t know what they are.

Hello Kevin...i can also see a triangular looking object above the tree lines and (dare i say this?) it looks invisible below the lighted object and these things can take off at very tremendous speeds as has been reported by many eyewitnesses over the years all around the world and maybe the camera can pick up some of these objects that the eye can not see?