You might have heard that former President Obama’s library, in Illinois, has documents relating to UFOs stored there. John Greenewald told me that he filed a FOIA request seeking that information but probably won’t see anything for quite a while. According to him, he was told to expect a 16-year delay on action on his request.

While that sounds unreasonable in this alleged climate of transparency, it does make some sense. The response to John suggested they had some four million documents to review, which doesn’t mean just four million pages because most, if not all, would be much longer than a page.

In his response, John said that he was just looking for unclassified UFO material, but that didn’t significantly reduce the time frame for the response. I mentioned that I lived close to Illinois but John said he had told them the same thing. Traveling to the library just wouldn’t be enough because all the documents had to be reviewed regardless of classified status.

John also received, just yesterday, the version of the report supplied to Congress about UAPs due last June. It was heavily redacted. For those interested in seeing the document, which you can see here:

Again, much of it was redacted so we don’t even know if there were 144 incidents or if there were 144 reports which could mean multiple reports of the same incident. In other words, there would be fewer than 144 incidents. We just don’t know what that number might be. This certainly doesn’t suggest that transparency is the watch word in this new investigation.

He also mentioned that there was a chart of UFO shapes (well, UAP shapes) included, but most of that was redacted so that we don’t know what shapes were being reported. To John, it seemed strange that the shapes would be redacted.

In fact, during my interview with John, which can be accessed on the audio player to the left, we discussed Disclosure. Neither one of us believed that we were moving in that direction and the Chris Mellon statements a few days ago, and a confirmation that most of the reports would be classified, suggested that secrecy was already in place. For those interested in the visual aspect of all this, you can watch the interview here:

So, while we wait for that, we can look at other sighting reports. There was a recent report from Islamabad, Pakistan. The witness said that when he first spotted the object, it was just a round, dark spot high overhead. The witness said the UFO was in sight for two hours and that he took thirteen minutes of video, zooming in and out on the object. Although it had no real shape to the unaided eye, when he zoomed in, he saw a rough triangular shape.

While he was puzzled by the UFO, there were suggestions that it might be a giant kite that was related to the Pakistan Basant Festival, that was taking place at the time.

I also found the report from a military pilot flying over the South China sea on November 4. He said that he spotted a dozen UFOs, in three formations that eventually disappeared into the clouds. There were three sets of four lights, each line following the one in front of it. The pilot said that he didn’t know what it was and had through it might be a reflection on the cockpit canopy. But the video lasted for nearly a minute which tended to rule out reflections. He was flying at 39,000 feet and said that the lights looked like no aircraft with which he was familiar.

Finally, the witness in Phoenix, Arizona, on March 3 of this year, reported that he had seen an egg-shaped object that that he thought was weird looking. He said it 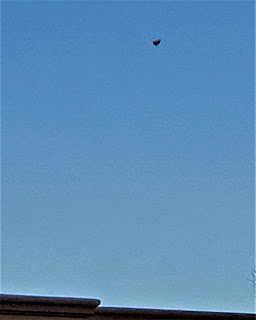 wasn’t a helicopter and it made no noise. Not a very impressive sighting, except for the photograph. It reminded me of the Pakistan sighting of the somewhat triangular-shaped UFO. While this isn’t exactly repeatability, it is close. That made it interesting and if I can develop additional details, I will report them here. The photograph can be found there as well.

I mentioned these sightings just because they are some of the latest reported but also because they suggest a trend, well, two actually. First is the number of sightings of triangular objects has increased dramatically in the last few years. Second, with so many cell phones out in the world, with better and better camera capabilities, we should be seeing more and better UFO photographs. It is only a matter of time before we have a sighting in which there are multiple independent witnesses that will provide some very interesting and scientific data.

It's a sign of the times that the Black Vault piece made it to Fox News commentary , where the "paste licking hipsters" made a series of jokes about cigars and their relationship to triangles..Not one sobering rational opinion..Collectively as a society and culture we're doomed , if this is the future generation of decision makers.

Whenever I see a report of large triangular UFOs I can't help but suspect that some entity has taken the concepts developed by the Aereon Corporation (especially their Dynairship 2) and further developed the idea using modern materials and technology.

How many of those millions of docs in the Obama library were created on typewriters? None? Documents on a computer can be stored in an array of formats and still be indexed by the operating system. I have more than 100,000 files on my PC that can be keyword searched. A search takes a few seconds.

There's a lot more to the declassification and FOIA processes than just keyword searches. The context where the keywords are used is important, for one, and the contents of the entire document need to be examined in case sensitive info is revealed or is discoverable via 'reading between the lines'.

In this recent interview with John Greenewald, it was mentioned that a ‘UFO shape chart’ of some kind was included in documentation from the earliest UFO studies in 1948. Can you please clarify what you were referring to/ what document these shapes can be found in?

Indeed, there’s not much discussion of such documented ‘stealth blimps’ in the larger conversation. Interestingly, Bigelow’s NIDS concluded in a 2002 investigation that black triangles were likely DoD lighter-than-air blimps, operated by AF Materiel Command and Air Mobility Command. Two years later, in Nov. 2004, NIDS retracted this report without any explanation & disbanded. Food for thought (take with desired amount of salt.)