As usual, when dealing with breaking new, additional facts are often learned. More and better information supplies a better understanding of the stories. Such are a couple of cases reported on Coast-to-Coast AM by me. First, is the Hawaii story that came complete with video of a bright object crossing the sky. I have heard from skeptical friends including Tim Printy, who suggest this has now been identified as the reentry and the disintegration of parts of a Venezuelan rocket booster used to launch Venesat-1. Given the documentation available, that seems to be the proper solution. You can read more about it here:

Just last week, we talked about a new photograph of what everyone wants to call a UAP (what a crappy term). This one was taken, as it turns out, not by the pilot of a Navy fighter, but by the person in the backseat, which used to be called a GIBS… for Guy in the Backseat or Girl in the Backseat… that is, the radar operator. 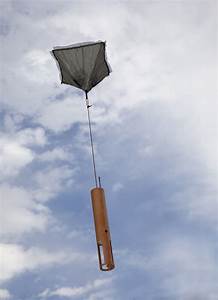 As noted, it was taken on a personal cell phone, and contrary to some reports, it wasn’t a cube-shaped object, but more of a triangle. Several of the people aligned with the NICAP website including Fran Ridge, Don Ledger and Brad Sparks have provided some additional analysis.

Ledger, for example, said, “The article shows a dropsonde [seen left] as an example of what the original photo could be. A dropsonde does not hover, you drop it and it's gone. It heads straight for the Earth's surface; the ocean. It's for tracking submarines.

“The top structure in the photo is there to keep the sonde (sonar buoy) from tumbling. Not only that, the sonde-which probably weighed between 60 and 100 pounds, could not be supported by a gas bag as small as that. The helium gas envelope would be probably 150 feet across.”

You can read more about this, and the fall out from the photograph in these links supplied by Brad Sparks here:

Dave Marler told me, “I am not as enthusiastic about the 2018 photo of the "cube" so much as the purported 2019 photo of an equilateral triangle with three large lights at each point. The latter depicts the quintessential image of these triangular UFOs that I have investigated. Despite variations in the reports, the vast majority over decades have been those with three large lights. Coupled with that is the description of the triangle in 2019 exiting the ocean and displaying trans-medium flight (i.e., sea-to-air). I am told through sources that this photo will most likely be officially released in due course.”

But the important point here wasn’t that another Naval officer took a picture of a UFO but that we learned about something known as the Unidentified Aerial Phenomena Task Force, which had been launched by the Deputy Defense Secretary, David Norquist which, in turn seemed to be boosting an effort by the Office of Naval Intelligence. Its mission is to detect, analyze and catalog UFOs. In other words, the Navy is taking the reports of UFOs seriously, though they think of them as UAPs. Isn’t this what the Air Force did for 22 years until they told us there was nothing to these reports and that they had no national security implications?

In June, Florida Sen. Marco Rubio, acting chairman of the Senate Intelligence Committee, instructed the director of national intelligence, the secretary of defense and other agency heads to gather information on “unidentified aerial phenomenon."

The Navy is also interested, according to the sources, in Unidentified Submersible Phenomena, which the Navy doesn’t want to discuss. These USPs have the ability to travel at hundreds of miles per hour which is a technology that isn’t available to the Navy.

This all reminds me of the trouble the Air Force had. UFOs that outperformed the latest fighter aircraft, travel at speed that should have caused them to burn up in the atmosphere, and to disappear in a flash. The Air Force solution was to deny that UFOs were anything other than delusion, hoax and misidentification.

Makes you wonder what the Navy knows that the Air Force didn’t and why, after all these years, are we again taking these reports seriously. Seems to me that there is still a great deal that we, those of us outside the Pentagon and Washington, aren’t being told.

It is a balloon. John Greenwald has fairly definitive proof of this on his you tube channel. The release of this picture as a possible UAP is embarrassing.

And Fran Ridge, Don Ledger and Brad Sparks disagree. The important point is the Navy interest in UFOs and new investigations being launched. I thought the Condon Committee "answered" all this 50 years ago. This suggests that some, at the highest levels, seem to think there is something more to the tales of UAPs (BTW, can we just go back to UFO?).

I must say that it looks a lot like that Mylar Batman balloon. A lot. But, what do I know? I would just like to see something way more convincing. I am also not a designer of alien spacecraft but it does seem a bit odd looking for a spacecraft. Cheers.