Coast to Coast AM Links

I have some updates, as I have promised in the past. I have been in communication with the MUFON State Director for Iowa about the Christmas Eve UFO sighting and photographs from Bettendorf, Iowa. Unfortunately, there has been no investigation into the authenticity of those photos by Iowa, nor have they been investigated in Illinois or Missouri, according to the state directors there. I am somewhat surprised, given there is a series of photographs. You can see the photograph in the following post.

I have also reviewed information about some of the developments of triangular shaped aircraft and find that this seems to be the wave of the future. There are a number of aircraft in development, including some that have been tested recently that are triangular. I have all this updated here and for those interested in that story, it follows this posting.

It was reported, just Tuesday, April 5, that the newspaper, The Sun, had received 1574 pages of documents related to the AATIP program. What is important here are the documents are related to scientific reports, letters to the Pentagon and research into the biological effects of close approaches on humans. The documents also mention electromagnetic effects which is the topic of my book, Levelland. The book contains a much deeper analysis of those EM Effects.

Here's an interesting aspect of this. The report mentions 42 cases, based on medical files where humans were injured. Cash-Landrum and Rendlesham Forest spring to mind here. John Burroughs is the only American airman to have received a determination of a 100% disability because of the close approach of a UFO.

Also mentioned are an additional 300 cases that were unpublished and therefore unknown to us. We don’t know the extent of those injuries, though I have reported on a number of people who were harmed by the close approach of a UFO. For example, see:

I should point out, however, that of those 1574 pages, only 38 of them related to UFOs. Most of the documents related to items dealing with research related to space exploration.

Finally, the report also contains information on poltergeists, crop circles, spontaneous human combustion, alien abduction and other paranormal events. I’ll put a link on my blog to all the reports available at John Greenewald’s Black Vault. You see the full list and read the documents here:

This doesn’t mean there are no interesting UFO reports out there. On February 28 of this year, the witness, in Georgetown, DE, reported a bright white oval that seemed to be hovering just above the treetops. The witness did take two photographs of the UFO that look somewhat like the tic toc objects reported by the Navy pilots. The object’s lights eventually changed then, and there was a diamond shaped pattern of lights in blue, red and green.

The witness then stopped the car and tried to get a video of the object, but was unable to get it going before the UFO disappeared. There was also a small plane flying in the area at the time, but it didn’t show up on the photos, which the witness suggested proved the UFO was large. I’ll note here that the photograph shows a shaking of the camera which does distort the image slightly.

A commercial pilot flying over Memphis, Tennessee, on January 31 of this year, saw a white, donut-shaped cloud that contained an object in it. There was no moon but there was a scattered undercast at about 10,000 feet. The object inside the donut was moving slowly. After about five minutes, the bright object disappeared and a minute later the donut faded. 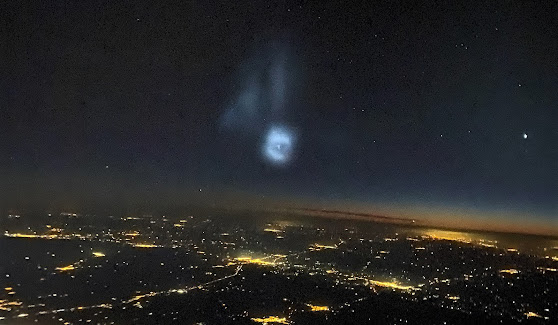 What we are seeing here is that there are more photographs of strange being taken every day. We need to discriminate between those that have terrestrial explanations and those that show alien craft.

"Also mentioned are an additional 300 cases that were unpublished and therefore unknown to us."

To me, the interesting thing is that somebody (or a bunch of somebodies) has been busy collecting this data. Based on the volume of the reports it sounds like injury due to exposure to the UFO phenomena is being taken seriously.

The mention of these reports gives us a view (narrow, admittedly) into whatever research is taking place out of the public eye.

I'd be really curious about the sources of the reports. Given some of the more interesting personal connections that have been cropping up (Bigelow, for example) I would not be surprised to learn that some of the reports are older ones gathered by Vallee in Brazil and which have remained in his personal research files for years.

That last photo from a pilot over Tennessee was of a SpaceX polar launch.

That small part of the overall document dump was written by Kit Green and drew heavily on the work of many others including UFO investigators, MUFON, CUFOS, and other sources. He didn't provide a list of all those cases or any additional data from them.

Thanks for the update.

I believe the Cash-Landrum incident is basically "night four" of the Rendlesham event.