For years, I have chided the skeptics for accepting solutions for UFO sightings without critical comment. The Air Force explained the Levelland sightings as ball lightning, but I have never heard a skeptic questioning that solution. The theory is that any solution is better than admitting that they have no solution at all. To question a solution doesn’t require them to embrace the alien explanation, merely to acknowledge that those solutions that have been offered are inadequate.

This is a way investigating the Memphis, Tennessee, sighting for which a solution has been offered recently. To recap for those who might have missed it, I mentioned the sighting by an airline pilot of an object he had seen while flying over Memphis. I was mainly intrigued by the photograph, and the fact that the picture had been taken by an airline pilot.

In my search to prepare for my weekly segment on Coast-to-Coast AM, I visit many sites, access various discussion and news groups, look at what has been reported to William Puckett’s Northwest UFOs, Peter Davenport’s Nation UFO Reporting Center, and even various MUFON sites, both national and by state. I pick those sightings that I think are interesting, and as I have mentioned, last more than a minute. The Memphis sighting was reported by the NUFORC fit a number of those criterion. That listing follows:

After I posted the information, there was a comment made to this blog about the sighting, which is relevant. According to that post, “That last photo from a pilot over Tennessee was of a SpaceX polar launch.”

Here, then, was a plausible explanation. The problem was, that explanation as offered provided nothing in the way of evidence. It was merely an opinion, which might be relevant… or might not.

So, I looked up the listing of SpaceX launches and found there was one on the evening to January 31. Liftoff, according to the records was at 18:11 hours (6:11 p.m.). Assuming that the pilot’s time of 6:55 p.m. (18:55 hours) is correct, and given he was airborne at the time and that there are clocks on the instrument panel, and his given time is accurate, it seemed to be a long gap.

I found a reference that suggested that the light from the launch would be visible at a radius of 520 miles, which is a long way from Memphis, but that was the number provided by SpaceX. It also mentioned that it would be visible for two minutes and 4 seconds (2:04) but the pilot said the light was in sight for five minutes. Again, this is probably an accurate time, given he was at the controls of his aircraft.

The distance from the launch site to Memphis was something over 700 miles (719. 4 miles to be precise) which also seems to put it out of range for the pilot. Of course, we see that he was flying at 39,000 feet, which changes that dynamic, not to mention that the SpaceX rocket would be climbing upward as it attempted to enter orbit, so the mileage figures might not be relevant.

I could find nothing that told me anything about the direction of launch, though it was supposed to be in a polar orbit. I did wonder, and in fact, do wonder, if they would be launching rockets over land rather than the Atlantic Ocean, but will note I found a reference to a southernly trajectory. I was unable to confirm exactly what that meant, other than a suggestion that the rocket would have been flying away from the Memphis area. I do not know, at this time, if all the SpaceX rockets are launched with the same trajectory, though I would suspect they are all launched out over the ocean.

The picture taken by the pilot actually provides us with the best clues about the solution. As you can see, it provides a dramatic look at the UFO. 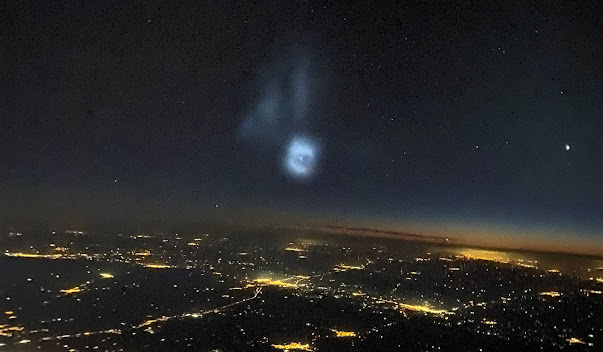 However, I found another picture of a SpaceX launch, which looked a great deal like the picture taken by the pilot. 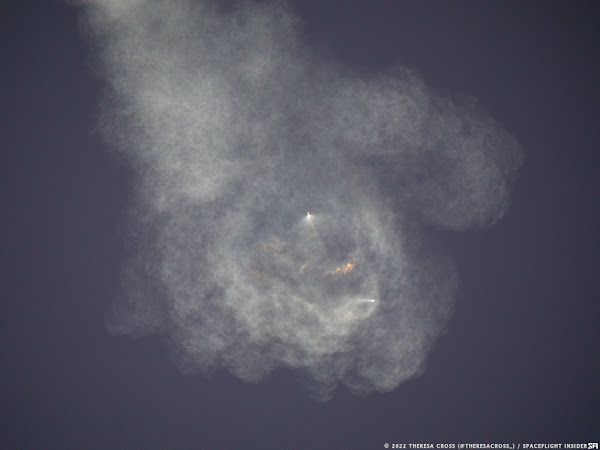 Although I don’t have any directions to the UFO or the heading of the aircraft for that matter, that might not be relevant. The photos seem to prove the point. While I would like to believe the pilot photographed something that was truly strange, the similarity between the two is difficult to ignore. Given that, I believe we have a solution…

And I will note that this is the way things should work. In the world today, with so many of us connected to one another, something that might have been unidentified because we didn’t have access to all the information, now can be explained. In the future, I’m confident that we’ll be able to repeat this process.

After launch, the rocket went around the earth and, as it passed over the central US, it performed a fuel dump that was visible. According to Seesat (http://satobs.org/seesat/Feb-2022/0000.html), the fuel dump happened at 0049 UTC, which is 1849 CST. This video came from Nashville, TN. The time listed was 1959 but does not indicate what time zone. Nashville is CST but it probably used EST for the time being posted.

I consider this one as solved.

Thanks for the additional information. As I mentioned, I too thought it was solved, but would have been happier with a little more information. Since we now have that, we can definitely add this to the identified pile.