The Heavily Redacted UAP Report and Sightings of Triangular Craft.

Last week, on the show, I talked about the heavily redacted “classified” report about UAPs that had been delivered to Congress. For additional information on this, see:

There has been a great deal of discussion about the report by those in the UFO community, wondering why the shapes would be redacted. There doesn’t seem to be anything affecting national security by discussing the shapes reported by the Navy pilots. I’ll confess that I don’t know the reason for the secrecy, though, there might be something hidden in that particular information that would reveal collection methods. That would be something to affect national security.

However, there have been suggestions on how we all might be able to learn something about those shapes. On page five was a section called, “But some patterns do emerge.” For example, it said, “The most common shape described by military personnel in their reporting but then they had blacked out the shape. They did the same thing in the next sentence that mentioned military aviators who had seen these objects. The shape was again blacked out.

Well, you get the idea. However, it seems that the number of letters in the redacted section provides a hint to the shape. At the end of the section, there is a blank that is eight letters long and that might be triangle. I thought, given the UFO world today, that triangles and triangular, if they fit, could suggest something that has a terrestrial based solution and that would affect national security.


I mention triangles because I did just talk to David Marlar, who is probably the leading expert on triangles. He said that the reporting of triangular UFOs goes back to the early 1950s, if not before, based on witness descriptions. He did say that in these earlier sightings, the triangles flew with the blunt edge forward, which suggests something that is defying the laws of aerodynamics. In the more recent sightings, it seems that the apex of the triangle is forward, which might suggest a technological edge for us and help discriminate between an anomalistic object and an advanced military aircraft. You can listen to my interview with David here:

And, if you’d rather watch that interview, you can see it here:

Marler also said that he doesn’t count as triangles the sightings where it was only lights. There needs to be a solid object seen among those lights. A witness in Lincoln, Nebraska, on January 28, of this year, saw such an object. The UFO was dark gray with three, round lights on the bottom. There was one light forward and one light on each wing. It was in sight for one to two minutes, moved silently, and disappeared into the clouds. He didn’t manage to photograph it, but did make the following drawing. 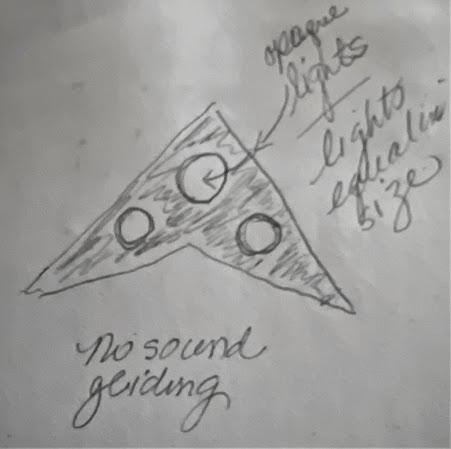 On January 31, the witness in Derby, Derbyshire, England, was walking the dog, when he spotted a very bright star. He thought it might be a planet or satellite so he used his phone to take a photograph. He was showing the photograph to a colleague and noticed another object above the first. This one was triangular shaped. The picture isn’t all that great but it does show the vaguely triangular object. 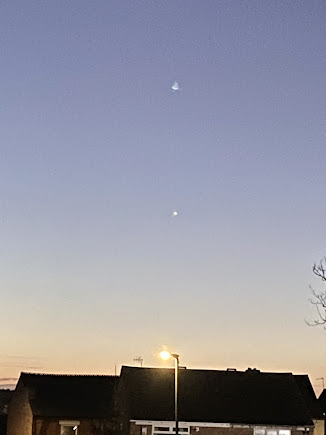 These are just two examples of triangular objects that have been reported since the beginning of the year. I’ll report on them periodically because it is one of the evolving trends in UFO research. I don’t know what there are so many such reports now, but they being made in the thousands.